Decentralisation in the Mashrek Region: Challenges and Opportunities 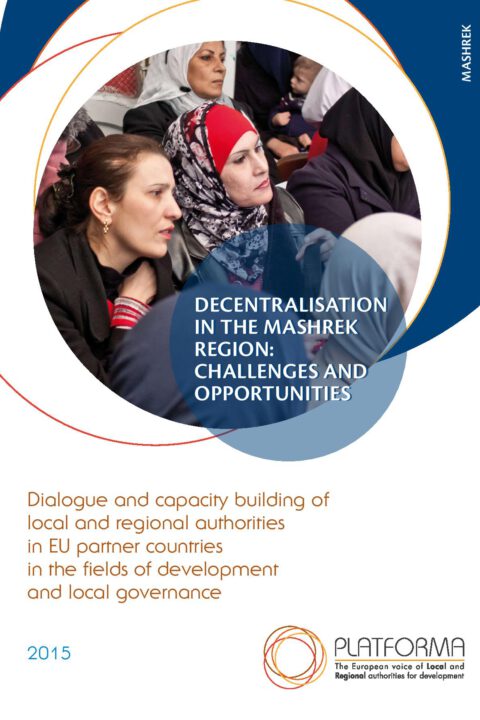 Discussion of decentralisation in the Mashrek region that includes an informative case study on Yemen with details of local financing and the relationship between central planning and investment through vehicles like the SFD and local investment initiatives.

Decentralisation has been one of the main tools advocated in recent years as a process for empowering local communities to engage more effectively in leading their own processes of development, improve service delivery, enhance social cohesion and, above all, support fundamental democratic changes. Many of these objectives have guided international aid programs in recent years. This paper aims at looking at how such processes have fared in the context of the Mashrek region of the Near East, with strong lessons learned for future aid programs, particularly those supported through the EU and other European bilateral programs. A broad review of current issues and themes has been presented to allow both regional stakeholders and European ones to open a discussion on the issue and build new visions and entry points for framing further cooperation on the issue.

The paper is structured in three parts. The first part provides a broad overview on the progress of decentralisation in the Mashrek region by contextualizing the process within global transformations, as well as within regional discourses and trends. Different countries in the region have focused on different approaches to decentralisation. Some have limited their approach to greater transfer of central competencies to the periphery through centrally-controlled bodies, or what we call more specifically de-concentration. While others went for a deeper transfer of powers and resources in what could be truly dubbed decentralisation, or alternatively, devolution. The main motors for such processes were discussed from the point of view of their impact on local development and eradication of poverty, democratization, maximizing of public resources, as well as their impact on conflict resolution and social cohesion. In each case, a broad level of mapping the field was provided to explain how the discourses on the issue and how the practice is taking place.

The first part of the paper also brings three case studies from Jordan, Lebanon and Yemen, to illuminate the different factors at play in steering the momentum towards decentralisation in the region. The three case studies document different national priorities and concerns while also exhibiting some structural commonalities. The focus on the Mashrek region has been considered in a very flexible manner beyond the narrow definition of the Mashrek in many classical geographical text books. The emphasis is on how the historical processes in the region have developed. In that sense, experiences from other countries in the region (both the non-Arab and the Maghreb region) provide important parallels. However, the Mashrek provides a special area of focus both for historical reasons as well as for framing the events in that region since 2011.

In the second part of the paper, the focus is set on how European policies affected the process of decentralisation in the past. This part examines the European experience itself with its own trials and tribulations and the lessons learnt that the European aid paradigms have tried to advance in developing the European Neighbourhood Initiative and other donor modalities in the Mashrek region. Successes and failures are looked at to draw further lessons for the future. Thus, while years of failed reform programs addressing national governments have led donors to focus on the smaller scale projects and programs and avoid the entangled bureaucracies and corruption at the national level, today there is a need to bring the next wave of programs to empower local authorities themselves to address national structural problems.

In the third part, the paper provides general recommendations for the region as well as specific recommendations to enlist debate and dialogue among policy makers in the EU as to the next generation of development and poverty alleviation aid destined to the region. Recommendations are purposefully left broad in their nature, focusing on situating the next round of projects and programs, rather than fixing their types and scope.

This paper is meant to support dialogue among a wide number of stakeholders and participants. As such it is meant to draw attention to points that can and should be discussed but it does not pretend to hold the ultimate word on any of these subjects. The main methodology adopted was to review the broader field of literature framing the question of decentralisation from as wide a perspective as possible. In the preparation for the post 2015 Sustainable Development Goals, the issue of local accountability for development should be seriously reconsidered, as it will have direct implications on future donor policies towards the region. It is hoped that this paper could contribute towards that discussion. However, it is also hoped that this paper will provide a broader scope on the issue than the current paradigms constraining the discourses of the different stakeholders at present.