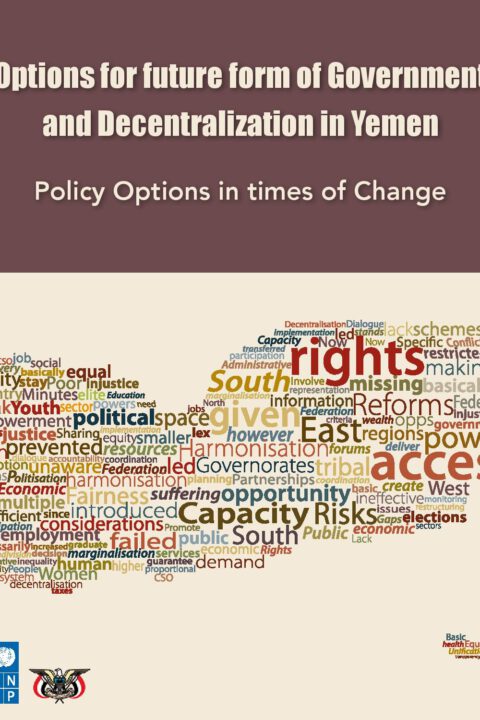 Yemen is at an important cross-road in its history. With a Government of National Reconciliation in place as a consequence of the signing of the peace agreement facilitated by the Gulf Cooperation Council (GCC), the country is in the process of laying the foundations for a robust, viable State that serves a vibrant, expectant Society. Efforts towards this end are enveloped in myriad challenges that run the entire spectrum of political, economic and social issues. With poverty high134.8% as per the Yemen Poverty Assessment 2007, jointly carried out by GoY, WB and UNDP and financial resources to combat it, low2Estimates for financial resources needed to meet the MDGs by 2010-2015 run to the value of $45b. The resources mobilised and spent between 2006-2009 was $3.6b, inclusive
of foreign assistance. , a State institutional infrastructure that is as fragile as the relations between different segments of society are tenuous, Yemen is in search of lasting solutions to both perennial and emerging challenges. The call for change is driven as much by demography—majority of the population is estimated to be less than 25 years of age3World Statistics Pocketbook, UN Statistics Division 2010 , 70% of whom are unemployed4Integrated Social Cohesion Project, UNDP 2011 ; annual urban population growth rate projected to be 4.6%5World Statistics Pocketbook, UN Statistics Division 2010 –as it is by demands for equal and more equitable economic opportunity and improved delivery of and access to basic services.

Considerable variation in inter-regional poverty, lingering questions over allocative efficiency of financial resources, a vulnerability to both exogenous economic shocks, and endogenous risks associated with long periods of political insecurity, reliance on the extractive industry for revenues that also fuels regional tensions, and a dire humanitarian and food security crisis that has made half the Yemeni population food-insecure6WFP, “Food security survey to reveal alarming levels of sever hunger in Yemen” (14 March 2012) caused by prolonged conflict, internal displacement, consistently high influx of refugees, up from around 78,000 in 2009 to just under 100,000 in 20127UNHCR, 2012, all contribute to the weightiness of the challenge.

The extent to which the Yemeni publics’ expectations can be met and their aspirations for change realised, depends on the manner in which the State’s institutional structures, mandates, processes, powers and its relations with other stakeholders in Society are shaped. The Peace Agreement lays out a roadmap for transition, and an imperative aspect of this roadmap relates to the structure of government and decentralisation in Yemen.