Pathways for peace and stability in Yemen 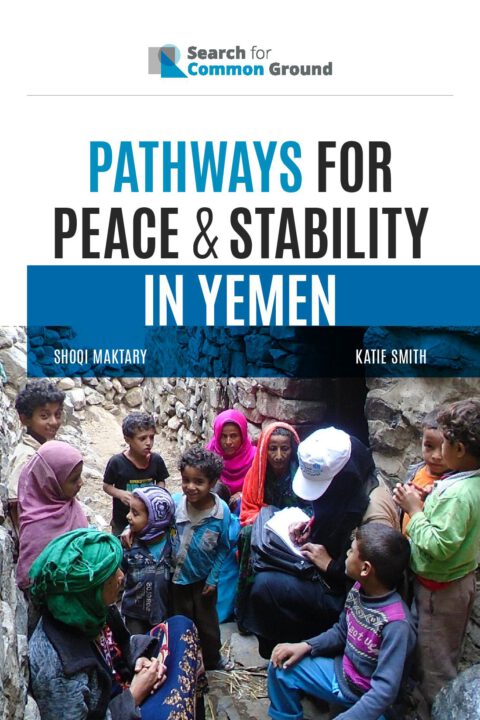 The report highlights the existence of parallel dimensions of conflict in Yemen. Political, regional, criminal, and identity-based conflicts are interlinked, but distinct. Community-level peacebuilding can tackle important dimensions of identity and extremist/criminal conflict and support drivers for peace overall.

Since 2015, Yemen has experienced an escalating armed conflict and complex humanitarian emergency, killing more than 10,000 Yemenis and displacing over 3.1 million people of a total population of 27 million. An untold number of Yemenis have died from second-order effects, including the collapse of the health system and shortages of food, water, and medicine. The United Nations estimates that an average of 75 people are killed or injured every day since the start of the conflict.1United Nations Office for Coordination of Humanitarian Affairs. “2017 Humanitarian Needs Overview.” Reliefweb. United Nations, Jan.2017.Web.19 June 2017 As of May 2017, over 17 million people are facing crisis or emergency levels of food insecurity as a result of the conflict, a 10 percent increase in just five months,2United Nations. “Briefing by the Under Secretary General for Humanitarian Affairs.” 10 Mar. 2017. Web. ; USAID. “Yemen Complex Emergency Fact Sheet#10 | May 25, 2017 | U.S. Agency for International Development.” USAID. N.p., 25 May 2017. Web. 19 June 2017. and more than 40,000 suspected cholera cases have been reported, with estimates that the total number could escalate to more than 300,000 cases by the end of 2017.3USAID, 2017., Miles, Tom. “Yemen Cholera Cases Could Hit 300,000 within Six Months: WHO.” 19 May 2017. Reuters. Web. <http://www.reuters.com/article/us-yemen-cholera-idUSKCN18F0Z3>

The war in Yemen is defined by four major conflicts over political control between the national, regional, and international forces: 1) the national conflict between the Houthis and the Hadi government; 2) the regional fight between Saudi Arabia and its Gulf partners and Iran; 3) the violent extremist organizations that are taking advantage of the conflict to entrench themselves in local communities across Yemen; and 4) the sectarian and tribal divides that are affecting local power dynamics.

Yemen’s national conflict is straining relationships within communities, entrenching divisions along pre-existing lines while also creating new ones. Prior to the current war, tensions existed between different tribal groups, political parties, and between north and south Yemen. While these divisions are not new, the violence has reinforced suspicion and mistrust from conflicting groups. Local gangs and militarized groups have restricted movement on roads between north and south Yemen to those born outside the region. In Aden, frustration with the lack of stability and continued feelings of marginalization from the central government has renewed calls for southern separatism. Other, new divisions are emerging, as well. Divisions between Sunni and Shi’a Muslim sects in Sana’a, for instance, have grown increasingly prominent and divided Muslim communities. Community gatherings in mosques had previously united individuals from differing social and religious affiliations, but political associations with sects (e.g. Zaidi Shi’a Muslims with the Houthi movement) have made worship exclusive affairs held in separate locations for different sects. In Taiz governorate in the south, conflicts over humanitarian assistance and access to local services between IDP and host communities have resulted in violence and reinforced regionalist or tribal affiliations as a source for conflict.4Search for Common Ground. Conflict Scan of Al-Shamayatein District, Taiz Governorate, July 2016. Search for Common Ground. Conflict
Scan of Al-Ma’afer District, Taiz Governorate, July 2016. Region of birth, religious belief, and tribal affiliation are core beliefs and affiliations tied to an individual. When these perceptions and divisions turn violent, they entrench ingrained identity disputes at the heart of the conflict, further undermining peace and stability.

Despite growing divides, there remain possibilities for peace. All four major conflict dimensions must be addressed to bring peace to Yemen, but right now, the most promising avenue for change is to address the deepening sectarian and tribal divides at the local level. Attempts at politically negotiated peace have not reached agreement and militarized groups benefit off instability. Yet, Yemenis cite frustration with enduring the incessant conflict and violence and express their exhaustion as a motivator for peace.5Search for Common Ground. Focus Group Discussions in Sana’a, Aden, and Ibb Governorates. April 2017. Even in situations of tension between IDPs and host communities in Taiz, Amran, and Ibb, host communities express sympathy for the plight of the displaced.6Search for Common Ground. Conflict Scan of Al-Shamayatein District, Taiz Governorate, July 2016. New actors are also emerging that can bridge divides. Women maintain connections across tribal, religious, and political divides given their shared status as women and are key influencers in the formal and informal education of youth. As the conflict grows in intensity and money becomes more scarce, women are growing in their household status as they bring in much needed incomes.7CARE, 2016. “No Future for Yemen Without Women and Girls – Policy Brief: October 2016.” 2 Dec. 2016. Web. 19 June 2017. <http://
reliefweb.int/report/yemen/no-future-yemen-without-women-and-girls-policy-brief-october-2016> State functions, such as managing resources and liaising with humanitarian organizations, have largely been undertaken by cities, Local Councils, and civil society organizations in the absence of central control. Local civil society organizations and traditional leaders can help bridge operational difficulties as they are already present in society and hold authority within their communities. The international community has the opportunity right now to build inclusive platforms for peace. Even as the national and international conflict dynamics persist, communities can choose to reject violence and protect themselves from descending into a perpetual cycle of conflict.

Any successful attempt at peace and stability in Yemen must then depend on the status of three factors: 1)the degree of popular acceptance for peace and coexistence; 2) the degree to which representative mediators and interlocutors work to implement the deal within their community and provide services; and 3) the degree to which the public accepts the validity of a peace deal. Despite ongoing violence and humanitarian crisis, this type of work cannot wait until after a political agreement is settled. If local conflicts and communal divisions continue to escalate, then there will be no constituency for an end to the conflict. A high-level peace arrangement that achieves political agreement will not resonate with divided communities, leaving a peace process but limited prospects for peace. Previous attempts at peace in Yemen have failed to prepare and include communities and were ultimately unsuccessful. Local mediators and interlocutors can both respond to local needs and grievances, but also bridge the divide between national and local to reflect interests at a higher scale. Addressing the growing divides within communities now and working to reconcile differences on the local level will engage conflicting groups to peacefully coexist, identify mechanisms and leaders for handling disputes, and create the channels to feed local interests and concerns into national processes.