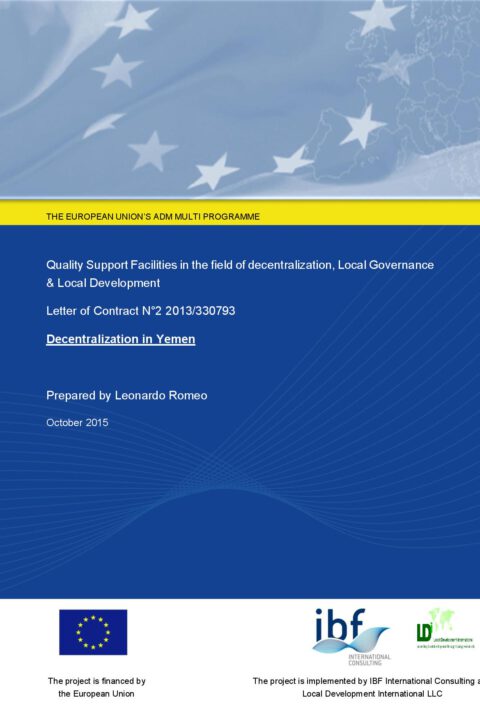 Despite the great variety, many Asian countries have chosen to pursue some form of decentralization. The way decentralization is structured and functions, however, is as diverse as the countries themselves, and not always in systematic ways. This variety results from considerable differences in country characteristics, histories and various political economy drivers that shape the dynamics underlying how public governance is managed.

Since the domestic political crisis of 2011, and the demise of the 35-years old regime of president Saleh, Yemenis have been struggling to negotiate a new political order. Hopes for a fair and peaceful process were raised by new presidential elections, the setup of a transitional government led by president Hadi and the holding of a broad-based National Dialogue Conference (NDC), which was meant to lead to the drafting and adoption of a new Constitution. But the process broke down in 2014 with the military occupation of over half of the country by Huti tribesmen, supported by forces loyal to former president Saleh, which ousted the transitional government, while Mr. Hadi fled the country.

Since then Yemen has been engulfed in a civil war opposing the Hutis coalition, allegedly enjoying Iran’s support, to Sunni tribes, a resurgent Southern Yemen independence movement and a growing number of Al Qaeda fighters. More recently Saudi Arabia intervened to bomb Hutis’ positions, in a move that achieved little to resolve the conflict but worsened the unfolding humanitarian crisis. Most analysts agree that the country is trapped in a nightmarish situation whose outcomes are hard to predict. Remaining hopes are currently tenuously pinned on a new round of “peace talks” in Geneva.