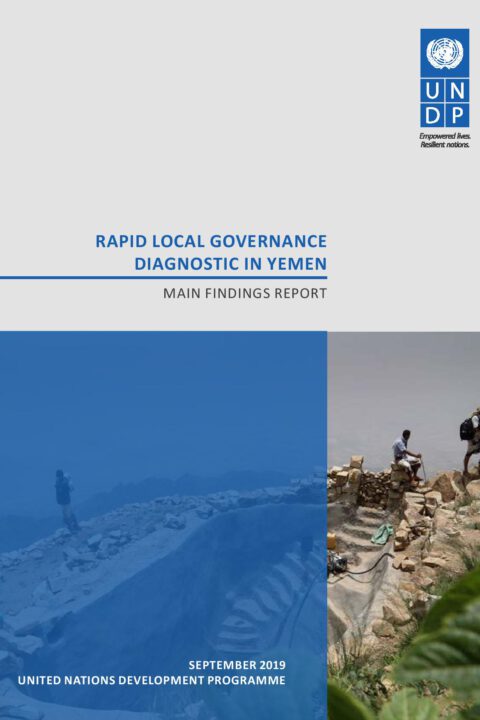 Rapid assessment of local governance situation in Yemen based on research in six governorates and 18 districts focused on current situation, including issues of financing

UNDP Yemen conducted a Rapid Local Governance Diagnostic (RLGD) in April and May of 2019 in six governorates (Aden, Hadramout, Hajjah, Lahj, Marib and Taiz) and 18 districts to better understand the current situation of local governance in Yemen. The Diagnostic focused on the current level of functionality of district and governorate authorities, compared to the situation that prevailed before the conflict, and in particular on their capacities to deliver services and perform their duties in a participatory, inclusive and accountable manner. The Diagnostic also collected the priorities of local governance stakeholders in terms of external support. The RLGD was not designed as a conflict or political economy analysis nor as a deepdive performance audit. It was a qualitative exercise and the accuracy of the data collected, mostly from Local Authorities themselves, remains subject to caution. Altogether, 205 semi-structured interviews were conducted with members of local councils, chief executives (governors, district directors), local administrations, directors of line ministry offices at district and governorate level, civil society organizations (CSOs) and private sector representatives, gathering a total of 385 individuals (eight percent women). Administrative data on human and financial resources and updated population statistics were also collected.

The results presented in this report only concern the areas surveyed – they cannot be simply extrapolated to the whole country, although certain findings are likely to apply to more governorates and districts than the ones surveyed.