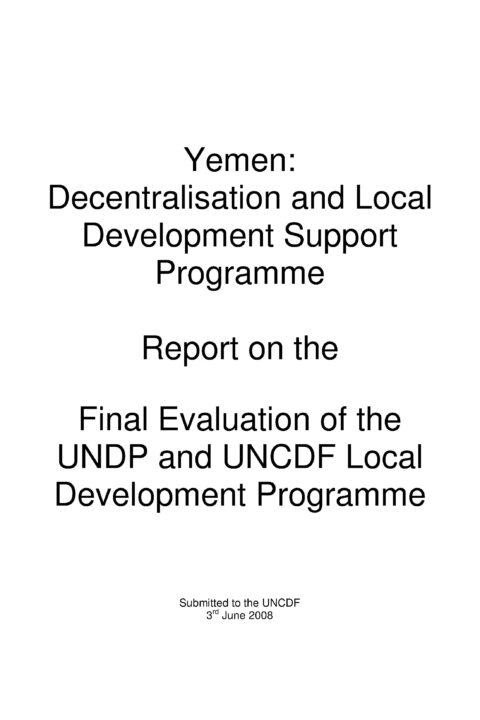 Final evaluation of UNCDF and UNDP local governance programme in Yemen for the period from 2005 to 2007. The evaluation finds significant benefits from donors working through and strengthening state structures at the local level.

The DLDSP began in 2003 and has operated since then through the Technical Secretariat supporting decentralization in MOLA. Initially, the program sought to activate 6 pilot districts in 2 governorates within the framework of the newly introduced Local Authority Law Number 4 of 2000 (LAL) and to introduce enhanced procedures for public expenditure management (PEM). During its first phase from 2003-2004, the program conducted a preliminary assessment of the legal and policy framework of Yemen’s localauthority system, its institutional structures and operational procedures and capacities.

The DLDSP’s Programme Document underwent a Substantive Revision in 2004 which led to the re-orientation of the programme during its second phase, from 2005-2007. The Substantive Revision focused on two main outputs, institutional development and capacity building, on the one hand, and policy and strategy development on the other hand. At the same time, the DLDSP expanded its scope geographically.

At the end of 2005, the program was operating in 28 districts in 6 governorates and, at the end of 2006, in 48 districts in 8 governorates. During the phase, the program deepened its investigation and experimentation in the areas of policy and the legal framework for decentralization, the local authority institutional structures and systems of operation as well as the administrative and service delivery capacities. It sought to use the lessons learned from its pilots to inform the National Decentralization Strategy (NDS) and the National Decentralisation Program(NDP).