Yemen’s war as seen from the local level 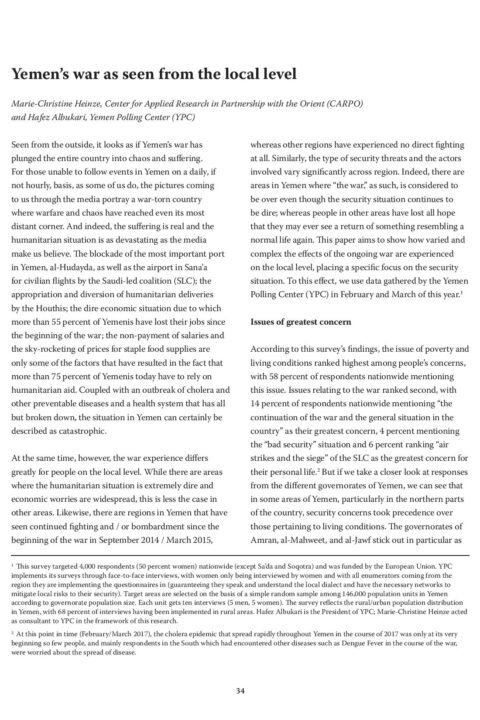 Analysis of security perception survey results from 2017 across all Yemeni governorates.

Seen from the outside, it looks as if Yemen’s war has plunged the entire country into chaos and suffering. For those unable to follow events in Yemen on a daily, if not hourly, basis, as some of us do, the pictures coming to us through the media portray a war-torn country where warfare and chaos have reached even its most distant corner. And indeed, the suffering is real and the humanitarian situation is as devastating as the media make us believe. The blockade of the most important port in Yemen, al-Hudayda, as well as the airport in Sana’a for civilian flights by the Saudi-led coalition (SLC); the appropriation and diversion of humanitarian deliveries by the Houthis; the dire economic situation due to which more than 55 percent of Yemenis have lost their jobs since the beginning of the war; the non-payment of salaries and the sky-rocketing of prices for staple food supplies are only some of the factors that have resulted in the fact that more than 75 percent of Yemenis today have to rely on humanitarian aid. Coupled with an outbreak of cholera and other preventable diseases and a health system that has all but broken down, the situation in Yemen can certainly be described as catastrophic.

At the same time, however, the war experience differs greatly for people on the local level. While there are areas where the humanitarian situation is extremely dire and economic worries are widespread, this is less the case in other areas. Likewise, there are regions in Yemen that have seen continued fighting and / or bombardment since the beginning of the war in September 2014 / March 2015, whereas other regions have experienced no direct fighting at all. Similarly, the type of security threats and the actors involved vary significantly across region. Indeed, there are areas in Yemen where “the war,” as such, is considered to be over even though the security situation continues to be dire; whereas people in other areas have lost all hope that they may ever see a return of something resembling a normal life again. This paper aims to show how varied and complex the effects of the ongoing war are experienced on the local level, placing a specific focus on the security situation. To this effect, we use data gathered by the Yemen Polling Center (YPC) in February and March of this year.1This survey targeted 4,000 respondents (50 percent women) nationwide (except Sa’da and Soqotra) and was funded by the European Union. YPC implements its surveys through face-to-face interviews, with women only being interviewed by women and with all enumerators coming from the region they are implementing the questionnaires in (guaranteeing they speak and understand the local dialect and have the necessary networks to mitigate local risks to their security). Target areas are selected on the basis of a simple random sample among 146,000 population units in Yemen according to governorate population size. Each unit gets ten interviews (5 men, 5 women). The survey reflects the rural/urban population distribution in Yemen, with 68 percent of interviews having been implemented in rural areas. Hafez Albukari is the President of YPC; Marie-Christine Heinze acted as consultant to YPC in the framework of this research.