Local Visions for Peace in Hadramawt 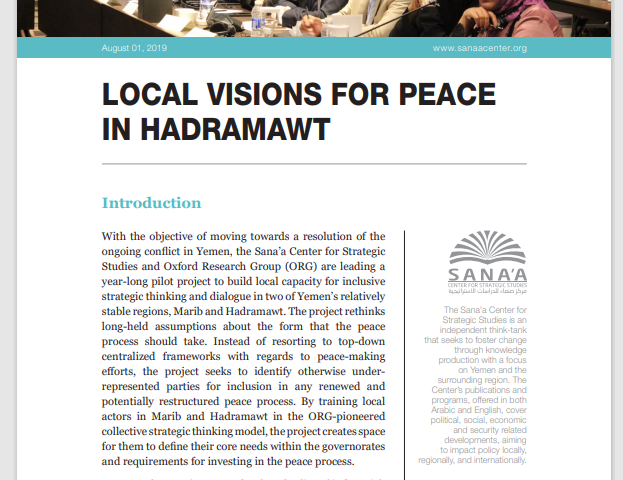 This policy brief presents a short profile of Hadramawt governorate and outlines its importance as one of Yemen’s key — and currently one of its most stable — regions. It gives an account of how the ongoing conflict has affected Hadramawt, before presenting the key challenges faced by the governorate.

With the objective of moving towards a resolution of the ongoing conflict in Yemen, the Sana’a Center for Strategic Studies and Oxford Research Group (ORG) are leading a year-long pilot project to build local capacity for inclusive strategic thinking and dialogue in two of Yemen’s relatively stable regions, Marib and Hadramawt.

The project rethinks long-held assumptions about the form that the peace process should take. Instead of resorting to top-down centralized frameworks with regards to peace-making efforts, the project seeks to identify otherwise under-represented parties for inclusion in any renewed and potentially restructured peace process.

By training local actors in Marib and Hadramawt in the ORG-pioneered collective strategic thinking model, the project creates space for them to define their core needs within the governorates and requirements for investing in the peace process.