Shabwa’s Journey to the Center of a Regional Proxy Conflict 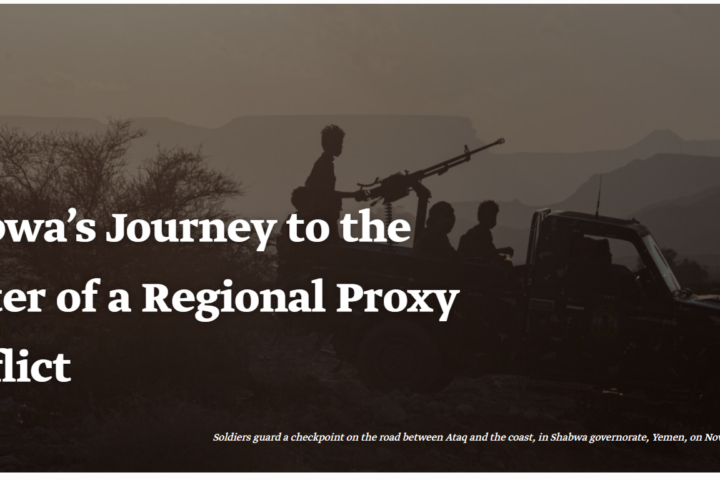 Short discussion of the situation in Shabwa governorate, focusing on the local balance of power, the role of Governor Mohammad Saleh bin Adio, and the positions of different external actors.

During the course of the ongoing conflict Shabwa has become a microcosm of regional proxy conflict in Yemen. The interests, agendas and struggles of outside powers intertwine in Shabwa, including the regional conflict between Iran and Saudi Arabia, behind-the-scenes influence operations involving Qatar and Oman, and even the battle for control in Yemen between two supposed allies, Saudi Arabia and the United Arab Emirates (UAE). No future for the South, or Yemen at large, can be conceived without taking into account the influence of Shabwa — and that requires understanding, channeling or even neutralizing when possible, the outside interests.

For Shabwanis, dealing with outsiders, their interests, and their various means of achieving them is nothing new. The area was part of the British-backed Federation of South Arabia before being forcibly incorporated into Soviet-backed Marxist South Yemen. Today, the main Western presence in the governorate comes in the form of international oil companies. Shabwa, as one of the three oil-rich “Black Triangle”’ governorates in Yemen along with Hadramawt and Marib, is home to the Balhaf liquified natural gas (LNG) export terminal, the country’s largest investment project.

Austrian OMV restarted production at Shabwa’s Habban oil field in 2018 while France’s Total and American Hunt Oil Company hold large stakes in the Balhaf export terminal, which ceased operating in 2015 and is currently a base for Emirati forces.