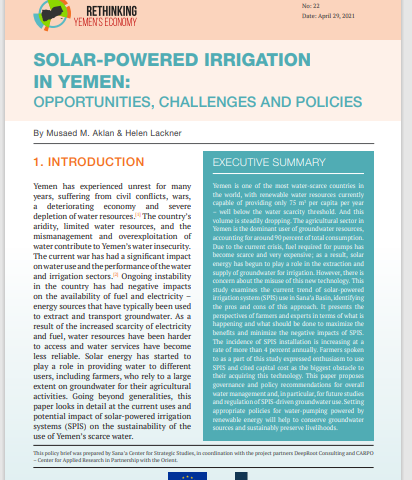 This study examines the current trend of solar-powered irrigation system (SPIS) use in Sana’a Basin, identifying the pros and cons of this approach. It presents the perspectives of farmers and experts in terms of what is happening and what should be done to maximize the benefits and minimize the negative impacts of SPIS.

Yemen is one of the most water-scarce countries in the world,with renewable water resources currently capable of providing only 75 m3 per capita per year– well below the water scarcity threshold. And this volume is steadily dropping. The agricultural sector in Yemen is the dominant user of groundwater resources,accounting for around 90 percent of total consumption.
Due to the current crisis, fuel required for pumps has become scarce and very expensive; as a result, solar energy has begun to play a role in the extraction and supply of groundwater for irrigation. However, there is concern about the misuse of this new technology. This study examines the current trend of solar-powered irrigation system (SPIS) use in Sana’a Basin, identifying
the pros and cons of this approach. It presents the perspectives of farmers and experts in terms of what is happening and what should be done to maximize the benefits and minimize the negative impacts of SPIS.The incidence of SPIS installation is increasing at a rate of more than 4 percent annually. Farmers spoken to as a part of this study expressed enthusiasm to use SPIS and cited capital cost as the biggest obstacle to their acquiring this technology.

This paper proposes governance and policy recommendations for overall water management and, in particular, for future studies and regulation of SPIS-driven groundwater use. Setting appropriate policies for water-pumping powered by renewable energy will help to conserve groundwater sources and sustainably preserve livelihoods.

The report looks at the ways in which Yemeni youth are working towards peace, and identifies actions that donors, diplomats, international non-governmental organisations and the United Nations can take to support Yemeni youth on the front line of peace building.   Years of brutal conflict in Yemen have had a catastrophic effect on the country […]

The study is a descriptive piece of field research on the traditional tools used to settle disputes in Yemen, including tools used by women which may be used in future; and the extent to which women are affected by disputes and obstacles related to women’s engagement in settling disputes.   Youth Leadership Development Foundation (YLDF) […]

The ongoing war in Yemen has wreaked havoc on much of the country, crumbling centuries old buildings, destroying critical infrastructure and leaving countless civilians dead. Fighting has extended to many corners of the country. Some areas, however, have managed to avoid the brunt of the war, mostly by virtue of their isolation and sparse population […]

We use cookies on our website to give you the most relevant experience by remembering your preferences and repeat visits. By clicking “Accept All”, you consent to the use of ALL the cookies. However, you may visit "Cookie Settings" to provide a controlled consent. You can also click on“Reject All” to reject the use of all cookies.
Cookie SettingsAccept AllReject All Read More
Manage consent

This website uses cookies to improve your experience while you navigate through the website. Out of these, the cookies that are categorized as necessary are stored on your browser as they are essential for the working of basic functionalities of the website. We also use third-party cookies that help us analyze and understand how you use this website. These cookies will be stored in your browser only with your consent. You also have the option to opt-out of these cookies. But opting out of some of these cookies may affect your browsing experience.
Necessary Always Enabled

Performance cookies are used to understand and analyze the key performance indexes of the website which helps in delivering a better user experience for the visitors.

Analytical cookies are used to understand how visitors interact with the website. These cookies help provide information on metrics the number of visitors, bounce rate, traffic source, etc.

Advertisement cookies are used to provide visitors with relevant ads and marketing campaigns. These cookies track visitors across websites and collect information to provide customized ads.

Other uncategorized cookies are those that are being analyzed and have not been classified into a category as yet.