The Yemen Social Fund for Development: An Effective Community-Based Approach amid Political Instability 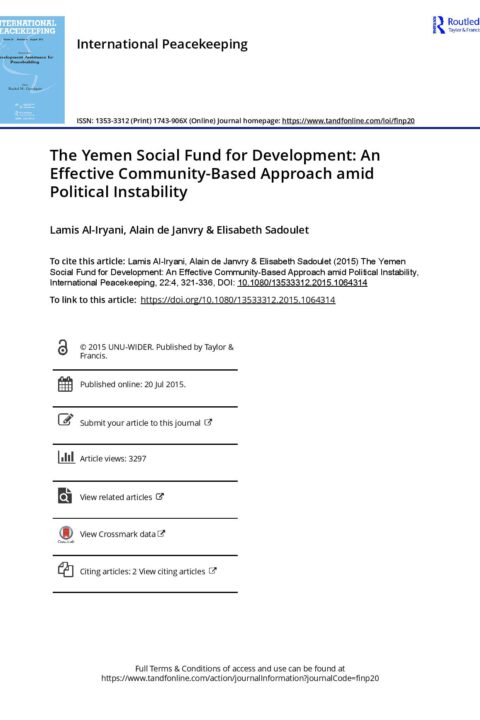 Review of multiple past evaluations of the Social Fund for Development (SFD) in Yemen that finds it was effective in combating poverty and analyses factors that contributed to its success.

In 2011, Yemen experienced an uprising similar to that of other Arab states in what has been described as the ‘Arab Spring’. It was associated with widespread social protests, economic paralysis and a deterioration of already poor government services. By the end of 2011, Yemen’s rival groups reached a precarious political settlement mediated by Saudi Arabia and the United Nations. At present, the political stalemate remains unresolved. In March 2015, in face of increasing violence, the UN warned that Yemen was ‘on the verge of total collapse’.1See www.bbc.com/news/world-middle-east-14704951.

In 1991–95, the Yemeni economy was in a bad shape due to numerous high profile incidents that changed the country’s landscape. The unification of Yemen in 1990 integrated two different civil service systems which placed a heavy burden on the national budget. The strain on the budget was mainly caused by the decision to keep all civil servants and to apply the higher salary scale in place in the north for the new government. In 1991, almost one million Yemeni workers were expelled from Saudi Arabia depriving the country of a large inflow of remittances and increasing the demand for jobs and social services.2 Abdulmajeed Al-Batuly, Mohamed Al-Hawri, Ministry of Planning and International
Cooperation of Yemen, Martin Cicowiez, CEDLAS-UNLP, La Plata, Argentina Hans Lofgren,
World Bank, Washington, DC, Mohammad Pournik, UNDP, Regional Bureau for Arab States,
Cairo, ‘Assessing Development Strategies to Achieve the MDGs in the Republic of Yemen’,
Country Case Study, New York: United Nations Department for Economic and Social Affairs,
Jul. 2011.

The regional aid to Yemen was halted due to the country’s political stand against the 1991 Gulf War. As a consequence Yemen experienced hyperinflation and entered into a political crisis that ended with a civil war in the summer of 1994. In 1995, to stabilize the economy, Yemen put together an economic reform programme based on the advice of the World Bank and the International Monetary Fund. These reforms included gradual removal of the government subsidies to food and fuel. At the same time, Yemen put into place a more targeted social safety net programme comprised of several sub-programmes.

In fragile states like Yemen, a Social Fund approach has proven to be an effective option to channel foreign aid through weak government institutions. In 1997, the government of Yemen established the Yemen Social Fund for Development (SFD) with the support of the international community, and in particular of the World Bank, to combat national poverty and reinforce the limited existingsocial safety net.3Government of Yemen, Social Fund for Development Establishment Law number 10, 1997.

This article argues that, although not without its weaknesses, SFD’s resilience and effectiveness in delivering aid for development in Yemen is in large part attributed to its direct relationship with communities, political neutrality, a flexible mode of project funding and operation and recognition by beneficiaries of the importance of its interventions. SFD’s efforts have proved to be scalable within Yemen. This is demonstrated by its ability to attract and effectively spend increasingly large amounts of external funding.

The article makes use of SFD’s external evaluations which include three consecutive studies conducted in 2003,4ESA Consultores Internacional, ‘Yemen Social Fund for Development 2003: Impact Evaluation Study’, Final Client Report, World Bank, 2003. 20065ESA Consultores Internacional/Environmental Resources Management, ‘Yemen Social Fund for Development 2006 Impact Evaluation Study. Final Report’, Client Report, DFID, 2007. and 20096 DFID Yemen Social Fund for Development – Impact Evaluation Final Report Nov. 2010. The Recovery and Development Consortium: Maxwell Stamp PLC, the Post-Conflict Reconstruction Unit, the University of York and COWI. visiting the same communities in addition to two consecutive institutional assessments. It also reviews SFD documents as well as aide memoires and case studies produced by SFD’s donors. It builds its argument on the basis of consistent findings in these evaluations and extracts from these key elements believed to be the main factors explaining effectiveness. The article reviews literature on social funds from the Independent Evaluation Unit of the World Bank and from reports of the World Bank’s Social Protection Group. Importantly, it also draws on our first-hand experiences with SFD over more than 16 years.