TRIBES IN YEMEN: An introduction to the tribal system 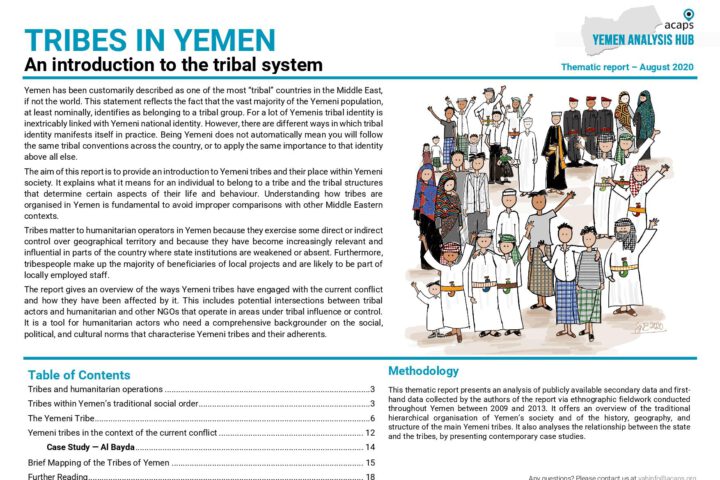 Yemen has been customarily described as one of the most “tribal” countries in the Middle East, if not the world. This statement reflects the fact that the vast majority of the Yemeni population, at least nominally, identifies as belonging to a tribal group. For a lot of Yemenis tribal identity is inextricably linked with Yemeni national identity. However, there are different ways in which tribal identity manifests itself in practice. Being Yemeni does not automatically mean you will follow the same tribal conventions across the country, or to apply the same importance to that identity above all else.
The aim of this report is to provide an introduction to Yemeni tribes and their place within Yemeni society. It explains what it means for an individual to belong to a tribe and the tribal structures that determine certain aspects of their life and behaviour. Understanding how tribes are organised in Yemen is fundamental to avoid improper comparisons with other Middle Eastern contexts.

Tribes matter to humanitarian operators in Yemen because they exercise some direct or indirect control over geographical territory and because they have become increasingly relevant and influential in parts of the country where state institutions are weakened or absent. Furthermore, tribespeople make up the majority of beneficiaries of local projects and are likely to be part of locally employed staff.

The report gives an overview of the ways Yemeni tribes have engaged with the current conflict and how they have been affected by it. This includes potential intersections between tribal actors and humanitarian and other NGOs that operate in areas under tribal influence or control. It is a tool for humanitarian actors who need a comprehensive backgrounder on the social, political, and cultural norms that characterise Yemeni tribes and their adherents.

Shabwa’s Journey to the Center of a Regional Proxy Conflict

Short discussion of the situation in Shabwa governorate, focusing on the local balance of power, the role of Governor Mohammad Saleh bin Adio, and the positions of different external actors. During the course of the ongoing conflict Shabwa has become a microcosm of regional proxy conflict in Yemen. The interests, agendas and struggles of outside […]

Analysis: Tribal sheikhs and the war in Yemen

Short assessment of the impact of the war on tribal structures and the role of tribal leaders in recruitment, mediation, and deescalation There is a growing interest among donors and western diplomats to explore the role tribal leaders can play to end the war in Yemen. This is a major shift in attitude as, until […]