“We did not know if we would die from bullets of hunger”: Civilian Harm and Local Protection Measures in Yemen 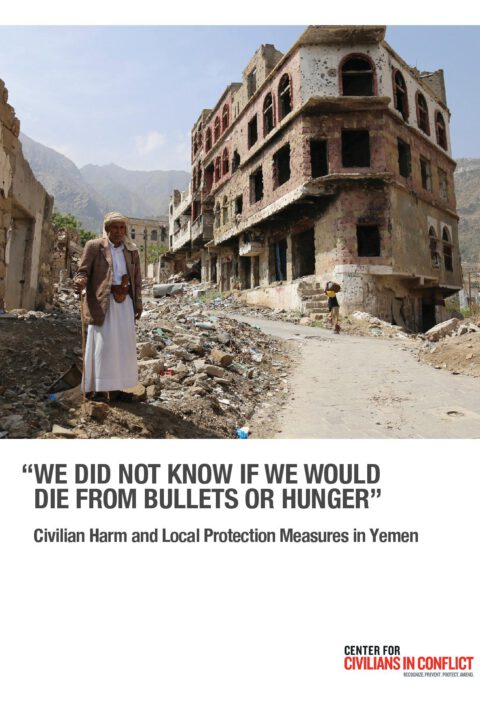 Investigation of patterns of violence against civilians and local coping strategies, based on interviews and information gathering in Al Bayda, Taiz, Shabwah and Al Hudaydah governorates

Civilians in Yemen have borne the brunt of armed conflict for over five years. As civilians struggle to survive, they face death, injury, homes that have been destroyed or damaged by airstrikes, shelling,
sniper attacks, landmines, as well as enforced disappearances and torture. The war has also severely exacerbated economic hardship and humanitarian conditions in the country. The United Nations (UN) estimates that close to 80 percent of Yemenis in the country need assistance and protection, with two-thirds of the districts in Yemen already on the brink of famine. As of November 2019, an estimated 3.3 million people remain displaced. The Armed Conflict Location and Event Data Project (ACLED) reports 100,000 people have been killed due to direct violence since 2015.1Sam Jones and Mattias Sulz, “Press Release: Over 100,000 Reported Killed in Yemen War,” ACLED Data, November 7, 2019,
https://www.acleddata.com/2019/10/31/press-release-over-100000-reported-killed-in-yemen-war/ These do not include fatalities from indirect causes such as starvation or disease.

Limited progress has been made on the December 2018 UN-brokered Stockholm Agreement to demilitarize the port city of Hodeidah, facilitate prisoner exchanges, and draft a statement of understanding on Taiz. The agreement, which called for an immediate ceasefire in Hodeidah city, has resulted in a 68 percent decrease in the number of security incidents in the city.2United Nations, United Nations Officials Urge Partiers in Yemen to Fulfil Stockholm, Hodeidah Agreements, amid Security Council Calls for Opening of Aid Corridors, June 17, 2019, https://www.un.org/press/en/2019/sc13845.doc.htm Violence has, however, escalated in other parts of the country such as Taiz, Hajja, and Al-Dhalee, resulting in death, injuries, the destruction of homes, and displacement.

Violence spread across Yemen when Houthis took over Sana’a, the capital, in September 2014 with the help of former President Ali Abdullah Saleh’s forces and expanded into the rest of the country. Fighting escalated when a coalition, led by Saudi Arabia and the United Arab Emirates (UAE), intervened militarily in March 2015 to reinstate the internationallyrecognized government of President Abdrabuh Mansoor Hadi. The situation remains a political and military stalemate with dozens of active frontlines across the country. The August 2019 clashes between pro-Hadi government forces and the UAE-backed Southern Transitional Council (STC) in the south have further complicated the conflict and put civilians at even greater risk.

Center for Civilians in Conflict (CIVIC) undertook research on the patterns of civilian harm, as described by civilians, by all parties to the conflict from 2017 to 2019 in Baydha, Hodeidah, Taiz, and Shabwa governorates, as well as from previously unreported cases in Baydha, from 2014. All parties to the conflict in Yemen are responsible for extensive civilian harm and have failed to take the necessary precautions to minimize civilian harm when engaging military targets. In some cases, civilians have been deliberately targeted, forcibly disappeared, and tortured.

Both Houthi and pro-government forces have used explosive weapons with wide-area effects. They have hit homes, medical facilities, schools, and other civilian infrastructure, causing many civilians in Taiz and Hodeidah to flee, and resulting in death and injuries.

According to ACLED, the Saudi-Led Coalition (SLC) is responsible for 67 percent of civilian casualties in the country since 2015.3United Nations, United Nations Officials Urge Partiers in Yemen to Fulfil Stockholm, Hodeidah Agreements, amid Security Council
Calls for Opening of Aid Corridors, June 17, 2019, https://www.un.org/press/en/2019/sc13845.doc.htm  A civilian from Shabwa who witnessed airstrikes in Hodeidah told CIVIC, “The airstrikes killed seven children and four women. The coalition bombed anything that moved.”4CIVIC interview with civilian, Shabwa, July 4, 2018. Civilians in the outskirts of Hodeidah city told CIVIC that they were not warned far enough in advance of offensive operations by the SLC to allow them to seek safety, resulting in death and injuries. While the SLC continues to undertake investigations of civilian casualties, the UN Group of Experts has concluded that it is unclear what remedial measures are being taken to change guidance or targeting processes to reduce civilian casualties, and found that the publicly available investigation reports have insufficient analysis.