The Governorate of Hajjah is located 123 kilometers northwest of Sana’a, due north of Al-Hodeidah, between Amran to the east and the Red Sea to the west. It borders the Kingdom of Saudi Arabia and is divided into 31 administrative districts.

Agriculture and animal husbandry are the key economic activities in Hajjah. The governorate produces 4.6% of the total agricultural production of the Republic of Yemen. The most important crops are fruits, cash crops, vegetables, and cereal. Beekeeping and fishing in the coastal areas of the governorate are also important economic activities. Hajjah borders Saudi Arabia, and transport and trade through the border crossing of Haradh is economically significant and provided an important source of customs income. However, the border is now highly securitized and very limited legal trade takes place. The governorate also has mineral deposits, most significantly gold, copper, nickel, cobalt, feldspar, and quartz. The governorate attracts domestic tourists to its cultural heritage sites and thermal springs. It is also known for handicrafts.1https://www.yemenna.com/index.php?go=guide&op=show&link=haja.

In 2014, 92% of Hajjah’s budget was financed by grants and central subsidies, while local revenues accounted for 8%. The most significant local revenues are local shared revenues, particularly zakat, and taxes (income taxes and taxes on profits, goods, and services).2Republic of Yemen, Ministry of Finance, Budget Sector: estimated local authority’s budget for the 2014 fiscal year. The war has reduced the availability of local revenue due to its impact on the economy. The establishment of the General Zakat Authority and the transfer of zakat to a central revenue has caused the governorate to lose an important source of income.

According to the 2014 Household Budget Survey, the poverty rate in Hajjah reached about 64%. More recent statistics suggest that the poverty rate is now 83%. The Interim Food Security Classification for 2019 ranks Hajjah as the governorate with the second-highest levels of poverty in Yemen, after Al-Hodeidah.

In addition, loss of revenue, insecurity, and instability have hampered the work of the council. Despite two administrative board members being in exile, the administrative board has continued to carry out its mandate with the limited resources available. The local council met in March 2019.  Executive offices have continued to function, but their performance is at a bare minimum.3Interview with senior executive bureau official in Hajjah. March 2019.

With regard to the humanitarian situation and according to OCHA (Humanitarian Response Plan for Yemen 2018), there are nearly 1.9 million people in need of assistance in Hajjah, which constitutes nearly 90% of the population. Sixty-three percent of them are in dire need. Based on recent reports, Hajjah is one governorates  most heavily damaged by fighting and airstrikes. Active fighting occurred in a number of districts, with Kushar district the most seriously affected.

During the end of 2018 and early 2019, there was a sharp increase in the number of IDPs from 203,000 to 420,000. IDPs are currently based in 300 IDP camps in the various districts of the governorate.  Poor water availability and a lack of sanitation services, especially for IDPs, has increased the incidence of cholera and other diseases. International organizations are working to address these needs.4OCHA, a report on urgent needs for the Governorate of Hajja, 23 February-11 March 2019, Issue No. 3.

Following the destruction of several hospitals and health centers, the governorate is suffering from an absence of health services. For a time, only one public hospital remained in service. It provides services to the population with support from international organizations. Funding from the local authority is minimal. Support from donor organizations has more recently allowed some local hospitals to reopen. Fighting, an influx of displaced people, and the spread of infectious diseases has increased demands for health services.5Interview with senior executive bureau official in Hajjah. March 2019

Next to the destruction of health infrastructure, schools in Hajjah have also suffered, with 161 schools damaged by the war.6OCHA, An Overview of the Humanitarian Needs in Yemen 2018. Teacher salaries are not being paid in Hajjah,7Economic and Social Development In Yemen Newsletter, Issue No. 30, December 2017, published by the Economic Studies and Forecast Sector in the Ministry of Planning and International Cooperation. which has disrupted education. Ongoing fighting at the time of writing is causing further damage to schools and other basic infrastructure.

According to OCHA, 71% of households in Hajjah did not have access to potable water in 2016/2017.8OCHA, An Overview of the Humanitarian Needs in Yemen 2018. Water and sanitation services are still functioning in the city of Hajjah, but at a bare minimum and largely thanks to external support.9Interview with senior executive bureau official in Hajjah. March 2019.

White Paper on the relationship between local authorities and central governments in Sana’a and Aden respectively, including a set of recommendations. 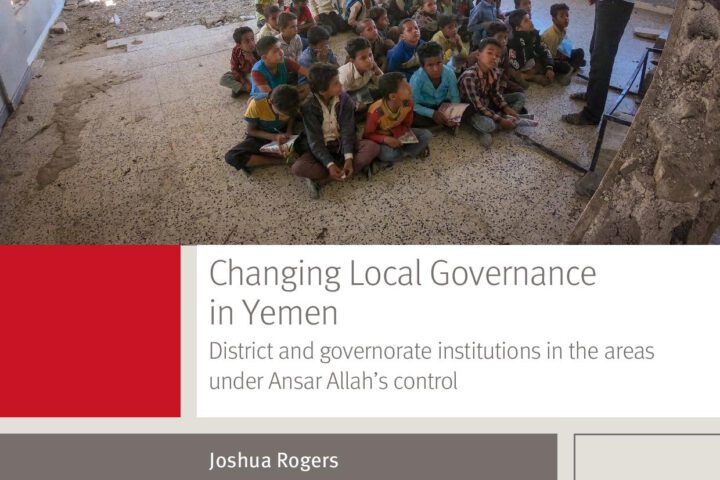