The Marib Paradox: How one province succeeds in the midst of Yemen’s war 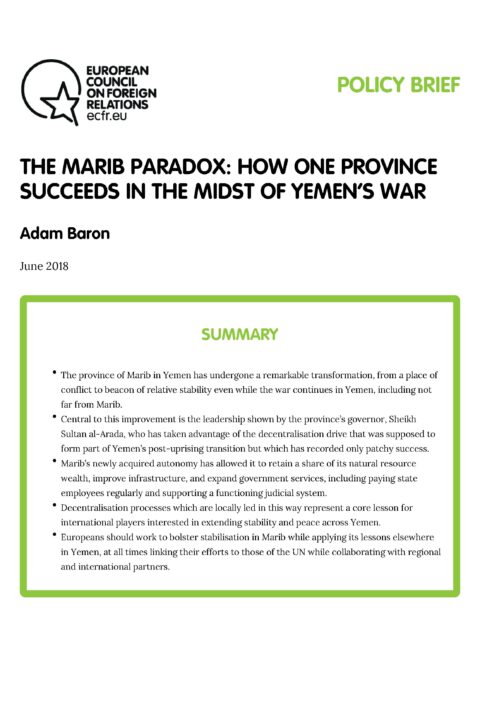 Some of the fiercest fighting in the recent conflict took place in Marib – and continues to take place in the province’s western district of Sirwah – but Houthiallied forces retreated from the provincial capital and other key areas in 2015. In the ensuing period, local authorities, with the aid of key regional powers, most notably Saudi Arabia and the United Arab Emirates, succeeded in restoring relative stability.

Once one of Yemen’s most restive provinces, Marib has emerged as a new economic and socio-political centre, something unprecedented in its recent history. After centuries of marginalisation, many Maribis will triumphantly tell you, it has regained a slice of its historical importance: Marib was once the seat of the Sabaean empire, one of pre-Islamic Arabia’s most powerful and advanced urban centres.

The wounds of war linger still. Damage from the fighting is visible on many of the city’s buildings, while the main hospital remains filled with patients who have lost limbs, whether from the fighting itself or from landmines left by the Houthis and their allies. And on the border between Marib province and Yemen’s capital Sanaa, the bloodshed continues.

Nevertheless, something has gone right for Marib in the way that it has not for provinces elsewhere in Yemen. Some things are unique to Marib, like its natural resource wealth, stable local power structures, and effectively driven support from international actors belonging to the Saudi-led coalition, including, most notably, Saudi Arabia itself. That being said, Marib’s experience holds wider lessons for Yemen’s future: embracing decentralisation, empowering local actors, and focusing on ground-up stabilisation are all strands of the story that international and local players interested in bringing peace and stability to Yemen should note.