Agriculture is the main economic activity for most of the population in the governorate. Livestock, poultry breeding, and beekeeping are also important economic activities. In addition, artisanal and handicraft production of traditional textiles, ornate glass making, and other traditional crafts remain important for the governorate’s economy. The governorate also holds some mineral deposits such as talc, which is used to manufacture paper, paints, beauty products, and pesticides, among other things.

With regard to the local authority’s sources of revenue, grants and central subsidies constituted 95% of the total general revenue for the governorate in 2014, while local revenues were only 5%. 1Please see the appendix for further information on these different types of revenue. The most significant local sources of revenue were local shared revenue and taxes, the most important of which are the zakat revenues, taxes on qat, and taxes on goods and services. The governorate also derived some income from fees for services and from fines and penalties. As elsewhere, these revenues were adversely impacted by the war, resulting in major funding challenges for the governorate.2Republic of Yemen, Ministry of Finance, Budget Sector: estimated local authority’s budget for the 2014 fiscal year.

According to the 2014 Household Budget Survey, the poverty rate in Al-Dhalea was 59.8%. In light of economic decline, large-scale displacement, and the conflict frontline running through the governorate, this rate has doubtlessly increased significantly during the past few years.

The local council of Al-Dhalea consists of 18 elected members in addition to the governor. Recently, the head of one of the council’s committees passed away and was replaced by another councillor, leaving one seat vacant. As for the administrative board of the council, it is functional and carries out its regular work headed by the governor, while the role of the local council itself is limited. The local council holds irregular meetings, hampered by the destruction of the administration’s building. The governor and other leading officials carry out their work from the office of the Public Works Project. The executive offices of the ministries are functional and carry out their day to day work with funding from the local and central authority, as well as a number of donor organizations. However, available funds are limited due to the economic situation and low central subsidies for the governorate.3Interview with one of the leaders of executive bureau, Al-Dhalea. March 2019.

As in other areas under control of the de-facto authorities, the governorate supervisor wields significant power in Al-Dhalea governorate.

According to OCHA’s 2018 Humanitarian Response Plan for Yemen, there are nearly 500,000 people, or about 70% of the governorate’s population, in need of assistance; 53% of them are in dire need.

There have been attempts to provide basic services in Al-Dhalea, but this has succeeded at best in providing the bare minimum due to lack of funds, destruction of infrastructure, and ongoing fighting. Health services, for example, are provided by the main public hospital in the city of Al-Dhalea and a number of hospitals and health centers in the districts supported by the central government, the local authority, and some international donors. However, the services provided do not meet the increasing needs of the population in light of internal displacement and associated crowding and malnutrition. Recently, the government built a new hospital in the governorate and efforts are ongoing to furnish and operate it in cooperation with donors.4Interview with one of the leaders of executive bureau, Al-Dhalea. March 2019.

With regard to education, 83 schools have been damaged by the war.5OCHA An Overview of the Humanitarian Needs in Yemen 2018. Teachers were being paid regularly as Al-Dhalea is in the list of governorates receiving regular salary payments.6Economic and Social Development In Yemen Newsletter-Issue No.30, December 2017, published by the Economic Studies and Forecast Sector in the Ministry of Planning and International Cooperation. Education in Al-Dhalea was generally stable and continuing in those schools left intact by fighting, but has been disrupted by displacement and destruction elsewhere. A number of schools damaged by fighting have been rehabilitated, yet overall, the governorate is experiencing over-crowding in classrooms caused by the loss of facilities coupled with ongoing displacement.7Interview with one of the leaders of executive bureau, Al-Dhalea. March 2019.

Nearly 70% of households did not have access to clean drinking water as of 2016/17 — a number that has likely increased.8OCHA: An Overview of the Humanitarian Needs in Yemen 2018. Al-Hajer Water Project supplies water to the residents of the town of Al-Dhalea, but this project has seen long delays even from the pre-war days. Water supply has been cut and residents are now relying on water tankers for their supply. Recently, a number of wells, pumps, and main lines in the city have been rehabilitated, and the local authority is trying to complete the rehabilitation of the distribution network. This effort is being supported by Oxfam and Kuwaiti Relief. As for the sanitation network in the city, it only covers 65% of the residents. Sewage water is collected in a treatment plant. Recently, a plot of land was leased for drainage of surplus flows from the treatment plant. Coordination is ongoing with Mercy Corps in an attempt to address this problem.9Interview with one of the leaders of the executive bureau, Dhamar. March 2019. 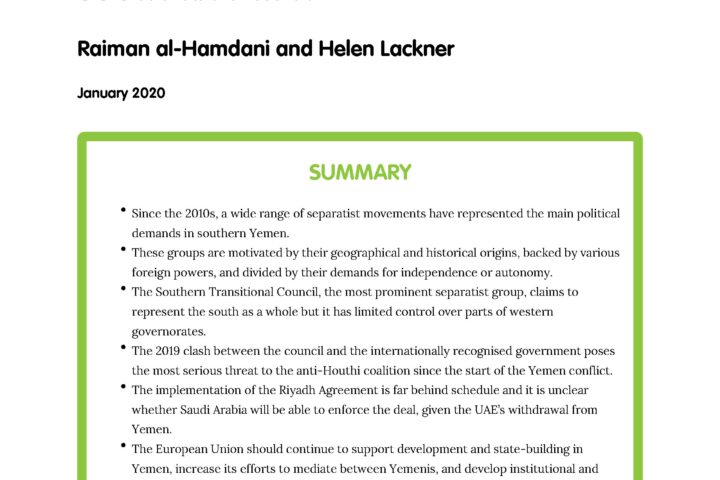 Analysis of situation in each of the governorates of the former PDRY with a special emphasis on local security actors This paper focuses on the origins, development, and prospects of political challenges in southern Yemen. It begins with an analysis of historical divisions in the south, outlining key issues within specific governorates – including the […]