The Governorate of Al-Jawf is located 143 kilometers to the northeast of the capital Sana’a along the Yemeni-Saudi border. Al-Jawf is divided into 12 administrative districts, and the city of Al-Hazm is the governorate’s capital. The governorate has a largely desert climate.

Agriculture and livestock breeding are the main economic activities in Al-Jawf. The governorate is the sixth largest producer of crops in Yemen, accounting for 5.8% of total agricultural production, with cereals, vegetables, fruits, and fodder being the most important crops. It hosts a number of tourist sites, including important historic sites.1https://www.yemenna.com/index.php?go=guide&op=show&link=jaof. The Al-Jabali mine in Al-Jawf exploits the governorate’s silver and zinc deposits.
With regard to Al-Jawf’s revenues, grants and central subsidies constituted 99% of the governorate’s total budget in 2014, while local revenues accounted for only 1% of the local authority’s budget.2Please see the appendix for further information on these different types of revenue. Local revenue is likely to have been further reduced by the conflict as the governorate is currently divided between the conflict parties.3Republic of Yemen, Ministry of Finance, Budget Sector: estimated local authority budget for the 2014 fiscal year.

According to the 2014 Households Budget Survey, the poverty rate in Al-Jawf was 55%. The economic decline and continued military confrontations of the past years have likely increased this rate during the past years.

The local council in Al-Jawf consists of 24 members in addition to the governor. Eight seats remained vacant in the 2006 elections because elections were not possible in all constituencies. Currently, there are four further vacant seats because members passed away, leaving 12 councilors. The local council has been inoperative since the outbreak of the war. The administrative board of the council is also inoperative. The governor is working directly with the executive bureaus, most of which are functional.

In terms of the humanitarian situation, OCHA estimates that there are approximately 500,000 people, approximately 85% of the population, in need of assistance. OCHA classifies 70% of those in need as being in dire need.5OCHA, Humanitarian Response Plan for Yemen 2018.

There are a number of hospitals and health centers in Al-Jawf providing health services to the population. One of the key hospitals – Al-Hazm General Hospital – provides free health services with funding from the Kingdom of Saudi Arabia. In addition, a number of donor organizations provide assistance to health services. However, there is no local funding for the health sector and the current level of service is insufficient to meet the needs of the population, especially with outbreaks of epidemics such as cholera, which require patients either to travel to Marib or abroad to seek treatment.6Interview with one of the community leaders and a political activist in decentralization in the governorate of Al-Jawf. March 2019.

The conflict has also taken a toll on education. Forty-three schools have been damaged as a result of the fighting in Al-Jawf 7OCHA, An Overview of the Humanitarian Needs in Yemen 2018.and teachers’ salaries are only being paid in part of the governorate.8Economic and Social Update newsletter, issue No. 30, published by the Studies and Economic Forecasts Sector, In the Ministry of Planning and International Cooperation. This has caused instability in the education system, especially in the early years of the war and specifically in districts under the control of Ansar Allah. Recently, the government made back payments for teachers in various districts of the governorate, contributing to relative improvements in teachers’ presence in schools.9Interview with one of the community leaders and a political activist in decentralization in the governorate of Al-Jawf. March 2019.

As for drinking water, more than 75% of the governorate’s population does not have access to safe drinking water.10OCHA: An Overview of the Humanitarian Needs in Yemen 2018. The local authority does not provide water, so the population depends entirely on private suppliers, including in the capital city. Al-Hazm also does not have a sewage network and the population relies on traditional waste disposal methods.11Interview with one of the community leaders and a political activist in decentralization in the governorate of Al-Jawf. March 2019. 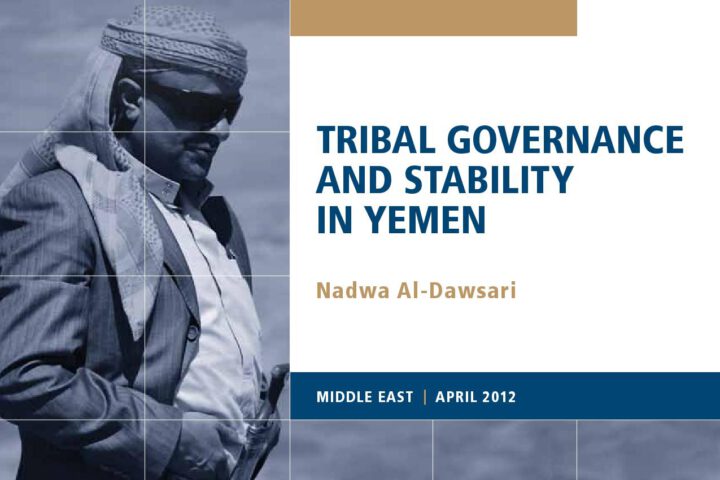 Tribal Governance and Stability in Yemen

Analysis of the role of tribes and tribal institutions in providing services and stability in Yemen, especially in the long negelected regions of Ma’rib, Shabwah, Al Baydha, and Al Jawf The power-sharing deal signed by Yemen’s President Ali Abdullah Saleh in November 2011 mentioned presidential elections, the formation of a national unity government, and a […]