The Governorate of Socotra is made up of six islands in the Indian Ocean off the Horn of Africa. The archipelago is 350 kilometers to the south of the Arabian Peninsula and consists of Socotra, the biggest island, and the islands Darsah, Samhah, Abdulkuri, Sial Abdulkuri, and Sial Socotra. Socotra was administratively part of Hadhramout until 2013, when it was declared an autonomous governorate, consisting of two districts. Hadibo is the capital of Socotra.

The dominant economic activity in Socotra is fishing and date palm cultivation. Grazing in the mountains and the plateaus sustains animal husbandry on the island. Socotra has unique flora and fauna and is recognized as a UNESCO World Heritage site. The island has long been considered a prime site for tourism, but does not currently have a tourism industry.1https://www.yemen-nic.info/tourism_site/locations/island/socotra.php.

According to the 2014 Household Budget Survey, the poverty rate in Socotra was 50%. Local sources claim that the poverty rate surpassed 65% in 2018.3Interview with a member of the local council in the district of Hadibo, Socotra. March 2019.

The governorate used to be administratively part of Hadhramout (Republican Decree 23/1999). Due to its geographical remoteness from the Yemeni mainland and continued demands from the local population for administrative autonomy, Socotra was granted governorate status by President Hadi in 2013. Due to the relatively small size of the governorate and the repeated postponing of elections, there is no local council at the governorate level. However, there are district level local councils in each of the two districts. The governor alone manages the governorate’s affairs. In the two districts, the work of the councils has been disrupted since the beginning of the war. The executive offices are present and functioning in Hadibo, but only have a partial presence in Qalansiya.4https://www.yemen-nic.info/tourism_site/locations/island/socotra.php. Accessed 19 March 2019; The Arab Centre for Research and Studies, The Forgotten Bliss Island. http://www.acrseg.org/39272. Date: 19 March 2019; https://arabic.euronews.com/2018/05/24/technology-4172579.

The UN estimates that there are nearly 30,000 people in need of assistance in Socotra; 20% of them are in dire need.5OCHA, Humanitarian Response Plan for Yemen 2018.

The archipelago was hit by the tropical storm “Mokono” in 2018, which left a number of people missing and destroyed a number of homes and properties. Hundreds of people were displaced and telecommunications services were cut off in a number of areas on the islands. This led the government to declare Socotra a disaster zone and appealed for help from international organizations for those affected by the storm.6Golden News website Collapse of the health centers and suffering of the residents of Socotra. http://golden.news/articles/691/. Date: 1 April 2019.

The governorate’s population lacks access to basic services, reflecting government neglect during the past decades.

There is only one hospital in the governorate – Sheikh Khalifa Bin Zaid Hospital, supported by the Khalifa Bin Zaid Al Nahyan Foundation for Humanitarian Works, based in the UAE. In addition, the governorate has a limited number of healthcare centers that lack medical staff, medicine, and equipment.7 The Khalifa Bin Zaid Hospital also suffers from a lack of medical staff and equipment. As a result, those who can afford it travel to other governorates to seek medical treatment, while the majority of the people are left with inadequate care. The situation is deteriorating, given the weakness of government funding for the health sector and a relative absence of funding from international organizations.8Al- Arabi-Al-Jadeed Website: Socotra Suffers a Health Crises as the Typhoon Approaches, 10 April 2017. https://www.alaraby.co.uk/society/2017/4/9/1. Date: 1 April 2019.

No schools or other infrastructure have been damaged by the war, since the governorate is far from the front lines. Moreover, teachers are being paid regularly,9OCHA, An Overview of the Humanitarian Needs in Yemen 2018; Economic and Social Development In Yemen Newsletter (Issue No. 30, December 2017) published by the Economic Studies and Forecast Sector in the Ministry of Planning and International Cooperation. so that education has continued without significant disruption.

As for drinking water, there is a water supply network that provides water to the two districts of Qalansiya and Hadibo. The network was heavily damaged by the “Chaballa” and “Meg” cyclones in 2016, but has since been repaired with Kuwaiti support. In 2019, work was ongoing to improve the water supply network in the governorate. The local authority signed an agreement with the Social Fund for Development in February 2019 to rehabilitate the water supply network in the capital city of Hadibo. Although neither the water supply network nor the sewage network covers all areas of the governorate, officials are working to expand the sanitation network with funding from donors.10Al Mahra Post, the Socotran authority signs an agreement to rehabilitate the water supply network “Hadibo” 4 February 2019. https://almahrahpost.com/news/9021#.XKJHNFXXKM8. Date: 1 April 2019. Aden Times Website, Repairs of the typhoon affected water tanks in Socotra, 6 June 2016. http://aden-time.info/NDetails.aspx?contid=10110. Date: 1 April 2019. Al Yemen Al Arabay website: Governor of Socotra pays a visit to the water supply and sewage network project in one of the neighborhoods of Hadibo, 17 June 2016. https://www.alyamanalaraby.com/64563. Date: 1 May 2019. 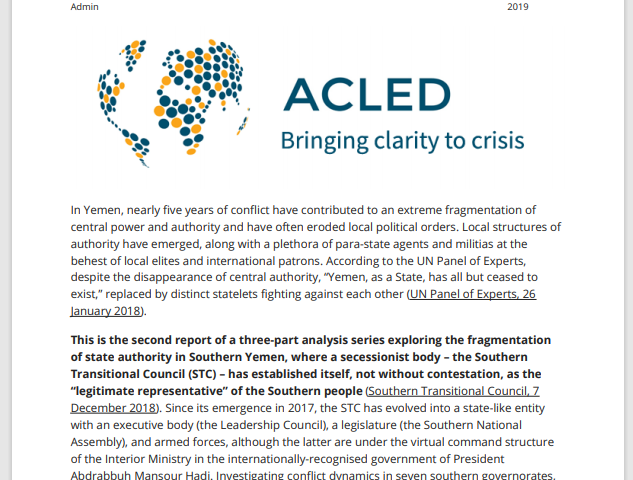 Events-data based analysis of conflict and protests in al-Mahra and in Socotra. In Yemen,  years of conflict have contributed to an extreme fragmentation of central power and authority and have often eroded local political orders. Local structures of authority have emerged, along with a plethora of para-state agents and militias at the behest of local […]